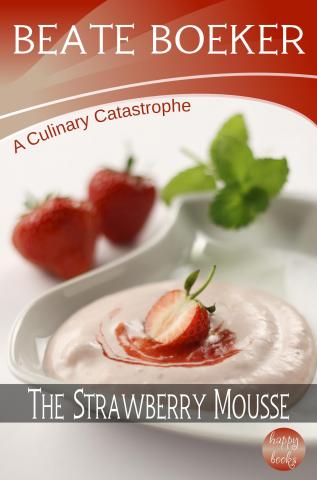 The Strawberry Mousse belongs to a collection of entertaining short stories with the name A Culinary Catastrophe. Each mouth-watering miniature novel focuses on one recipe that needs to be mastered by the heroine or hero who is in turn baffled, bewildered, desperate, and ecstatic while concocting a delicious dish. The Strawberry Mousse is the second in the series.

The recipe which is at the heart of the story is always shared at the end, so you’ll be able to transfer the experience into your life – if you dare, that is!

In this episode, Tak and Zen try to prepare a legendary family recipe of strawberry mousse for the visit of Zen’s aunt. As the aunt is an avid fan of health food, they spend more time than planned on finding organically grown strawberries. On top of that, the marzipan paste behaves in a less than cooperative way, so when the aunt arrives, the mousse is not yet done. But this is only the beginning of their troubles . . .